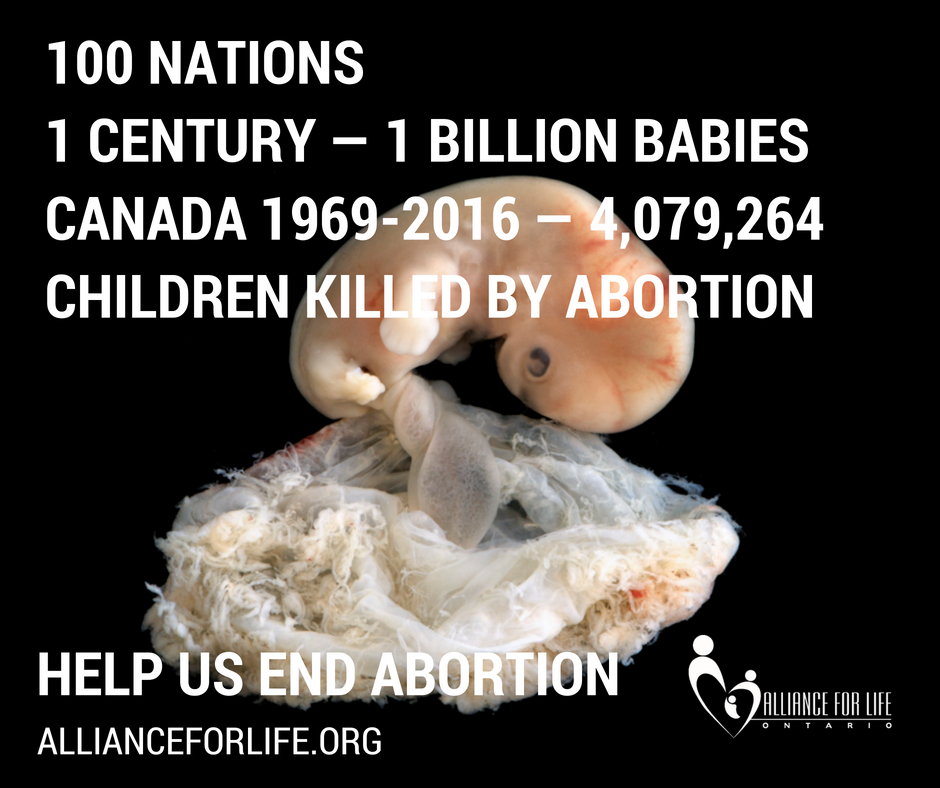 Approximately two weeks ago I sent the newly published Abortion Worldwide Report to every MP in Canada on behalf of our  provincial board, our member groups across Ontario, the thousands of their members and on behalf of every pro-life Canadian. This initiative is part of the educational portion of a wider campaign entitled The Petition of One Million which is endeavouring to raise 1 million signatures requesting that our Parliament consider extending legal protection to every single human from his/her biological beginning. A daunting task I grant you but a worthy one if we gain justice for our little ones not yet born.

As part of this project we included an educational portion for our MPs, Senators, and Ontario MPPs which began with sending a customized 2018 calendar to each of them with fetal development facts. Beautiful pictures of children and babies smiled out at you from every calendar page which also contained a couple of images of them while in the womb. A subtle message we hoped that this little one was just the same in the womb as out.

The mailing of the Abortion Worldwide Report, which is a tome of 308 pages detailing the numbers of abortions worldwide in the last century, was another educational piece and was accompanied by a letter stating our profound sadness at the staggering number of 1 billion abortions worldwide over the last Century and noting Canada’s contribution during 1969-2016 to this tragic picture of 4,079,264. We expressed our hope that these numbers might awake in the hearts of our politicians a better way to assist women than induced abortion.

You can imagine my surprise this week to receive the copy, which was sent to Irene Mathyssen, M.P London-Fanshawe, back in the mail. Even more surprised to see it addressed to: Jakki Jeffs, PRO-BIRTH, ANTI-CHOICE, 26, Norfolk Street, Guelph Ontario N1H 4H8. 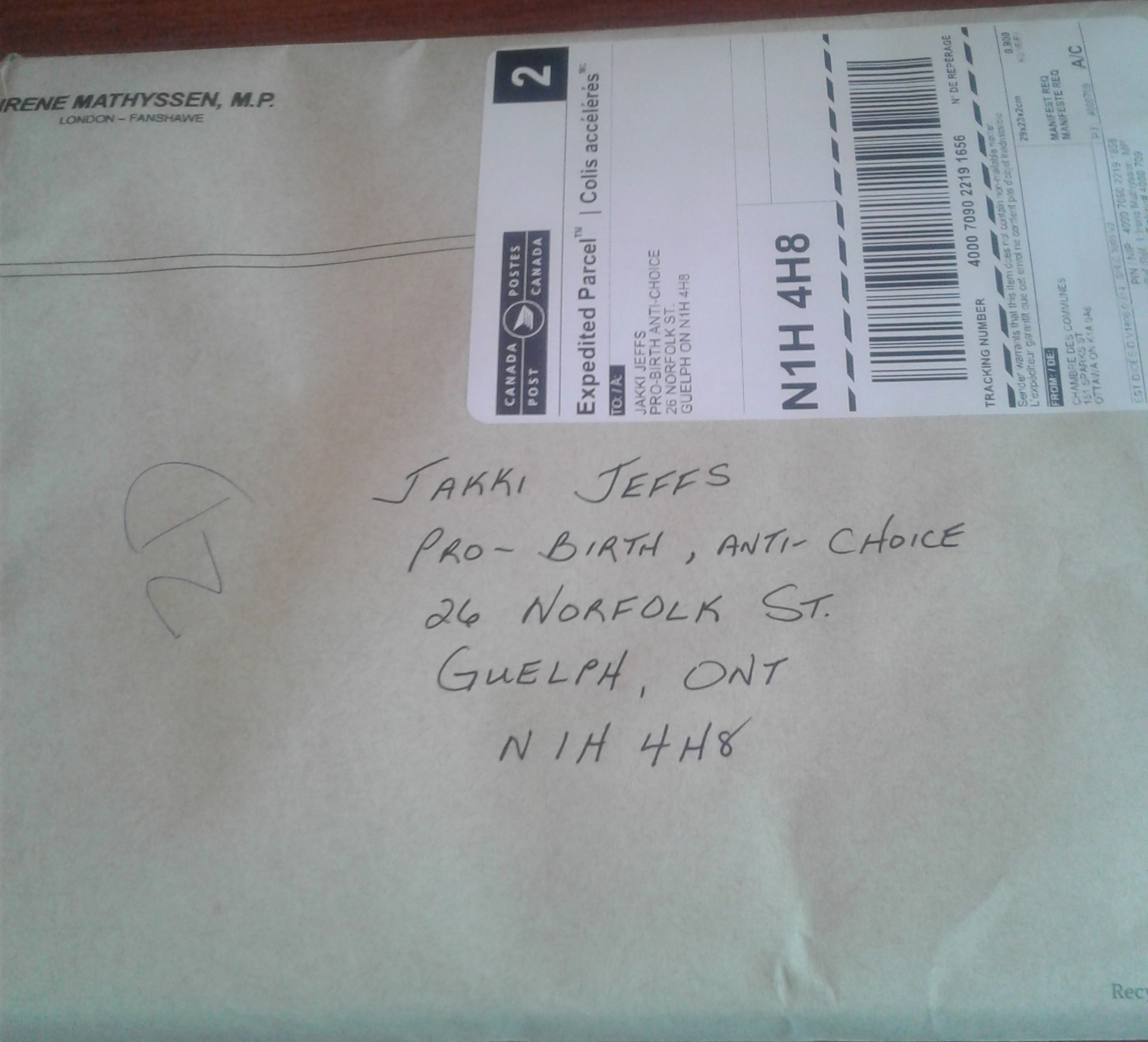 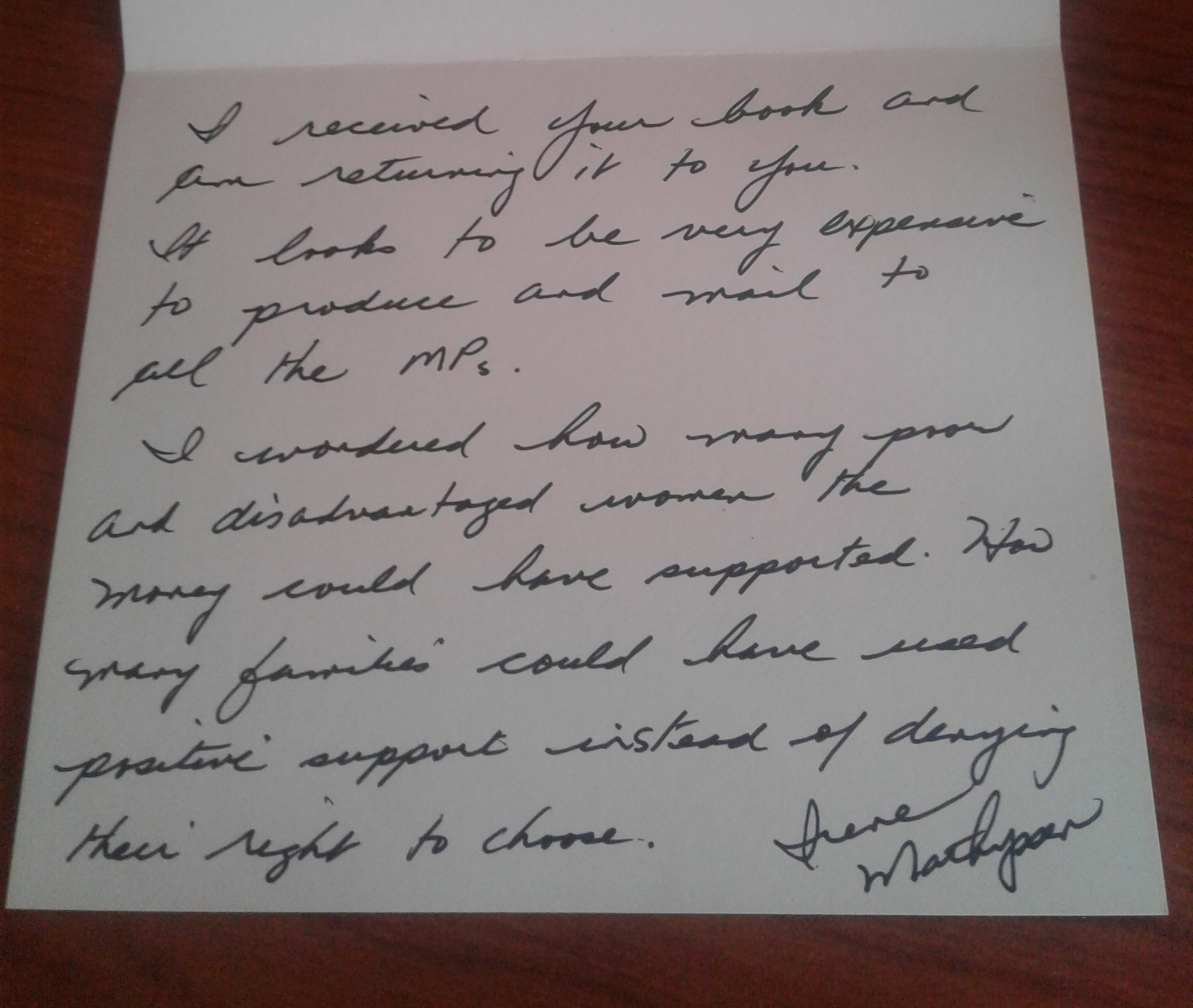 You can read Ms. Mathyssen’s letter above but I would like to comment on a couple of her statements which included a claim that the manual looked “expensive to produce,” and to mail to all the MPS.” (this project was funded by a donor). Would someone please let Ms. Mathyssen know that all mail from residents of Canada to their Federal Government representatives is FREE while the House is sitting – on second thoughts maybe not – she might want to change that! It might be the only thing the NDP member does not want available for free if we pro-life folks may take advantage of this great gift.

Ms. Mathyssen also ponders how many “poor and disadvantaged women” the money could have supported and “how many families could have used positive support instead of denying their rights” Oh my goodness how long have I got?

Firstly, since Ms. Mathyssen appears to support “choice” she should extend that to those, who have finances and who wish to fund a manual such as the Abortion Worldwide Report being printed, that same courtesy. Then of course the question of the poor and disadvantaged women which always is thrown at pro-life supporters. I encourage readers and Ms. Mathyssen to go to the link below on our wewantthedebate website. We did extensive research a few years ago into the location of abortions facilities in Ontario and found that there appeared to be an inordinate number in areas where those with lower income and immigrants to Canada were living.

Overcoming poverty and hunger by eliminating the poor and the hungry?

“Poverty means not having. Not having the basics: good housing, education, childcare, transit, health services, dental care, and extra curricular activities. Not having the things that prepare us for life, keep us well connected with others. Not having a reasonable shot of doing well. Poverty is about incomes. But it’s mostly about affordability. When the basics are unaffordable, poverty means isolation and desperation.”

My question to Ms. Mathyssen is how does abortion, which by the way is not a right in Canada, see Abortion – Legal Aspects, Parliamentary Library of Canada 1989, actually address all the issues raised by Dr Mckeown and Armine Yalnizan? I think it is also important that Ms. Mathyssen understands that we support the establishment of Pregnancy Homes (I started the planning for one in 1999 which is a tremendous success and now has the addition of a Transition Home celebrating 8 apartments) and pregnancy support services – we have two dedicated ones in Guelph, one which is run by the local right to life association and again I had major involvement in that also. Pro-life people establish these help centres everywhere they are needed and we also help produce important documents like the Abortion Worldwide Report.

Dr. McKeown, states that “These health impacts of poverty are preventable. Eliminating poverty is the best medicine money can buy.” I have to ask, how does abortion prevent any of these risks? We know it does not, but only adds more – instead of assisting the poor, abortion destroys the children of the poor nothing else changes. It has always seemed tragic to me when you look at the statistics of those who support abortion – you will find that lower  educated and those in the lower income levels are generally opposed to abortion at higher rates and yet according to the 2007 POWER Report access abortion twice as much as those of higher income.

Possibly this is down to the fact that in the areas most populated by lower income and immigrant families there is a glut of abortion facilities  apparently every governments’  solve all response. Once again the 2007 POWER report provided a breakdown of abortion rates in every LHIN (Local Integrated Health network). Across Ontario the statistic was, that for every 100 live births 37 women accessed induced abortion – yet in the LHINS which boasted the highest rates of immigrants we saw the following;

Central West LHIN; ““Enriched by its cultural diversity, the Central West LHIN is home to the highest proportion of vicible minorities in Ontario who represent about 50% of its population..” 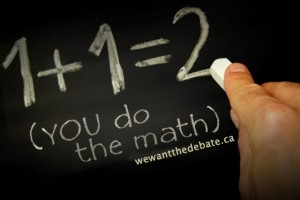 55 abortions for every 100 live births

“..Immigrants make up 41% of the population in the Toronto Central LHIN..”

52 abortions for every 100 live births

Central LHIN; “…The residents of Central LHIN are also diverse, with the highest proportion of immigrants in the province and twice the provincial average of visible minorities..”

50 abortions for every 100 live births

Mississauga Halton LHIN “The MH LHIN is one of the most diverse LHINs, with 36% of the population being a visible minority…”

46 abortions for every 100 live births

Central East LHIN “..Toronto region also has the highest proportion of visible minorities in the LHIN…”

46 abortions for every 100 live births

However, I digress, the point of this post is to highlight the fact that Ms. Mathyssen’s response to me, let alone her addressing of that mail, was conduct unbecoming of a sitting member of Parliament. It is disrespectful of her pro-life constituents, it demeans the office of MP and highlights a new era of representation of only those we agree with on any given issue. As a pro-life individual I have been used to being treated as though I am a neanderthal or having no brain to think with or on some occasions of being unemployed as many abortion supporters keep urging me “to get a job”. However, Ms. Mathyssen has sunk to a new low by addressing her correspondence to me in the way she did and you know she is not anywhere close. I am certainly PRO women giving birth to their children, rather than killing them by abortion, but I am not anti-choice. I believe in choice but not the choice to kill, to steal, to rob, to rape, to abuse, to defame or to demean, to name a few.

It is time that Ms. Mathyssen and those who stand under the banner of choice actually provide that to the women they assert they support. Poor and disadvantaged women need support to bring their children into the world, to feed, clothe, educate and provide health care for them – abortion does none of that it just kills their children and leaves them possibly wounded themselves and facing the same problems that pressured them into resorting to abortion.

Pro-choice means no choice but abortion, and what a worn out song that is in Canada in 2018.