Beware when you see “emergency exit” in Quebec!

Beware when you see “emergency exit” in Quebec! 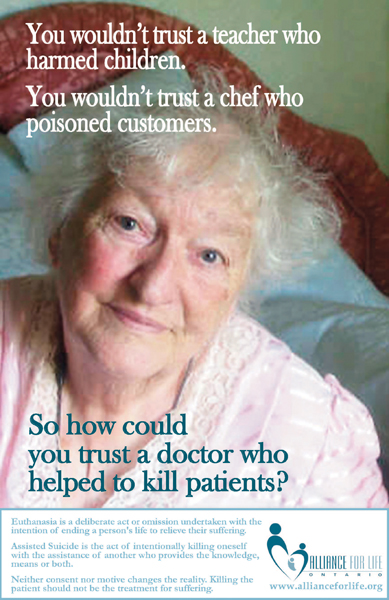 You would think they had won a football game to see the response of the Quebec legislature to the passage of  a bill which sanctions medical killing of vulnerable people. If the Netherlands and Belgium are indeed the template for Quebec then it will not be long before Ms Hivon’s “small number of people” will be a mass extermination of the sick. Does Ms Hivon actually believe that you can only have a little bit of killing? Physicians killing children by abortion have shown us what that road leads to – almost 4 million dead in 45 years even if we did not have the Netherlands and Belgium to compare with medical killing at the other end of life.

“Quebec has the highest provincial rate of suicide. Suicide is one of the leading causes of death in the young and in general there are more men that die by suicide. The psychological and social impact of suicide on the family is enormous. About $9 million a year goes to fund the province’s 30 or so suicide prevention centers – far less than is needed, given the size and severity of the problem.”

“In 90 per cent of cases, people who commit suicide suffer from a mental health problem like depression, anxiety or personality disorder, said Rose-Marie Charest, president of the Quebec Order of Psychologists. Still, seeing a psychologist will not necessarily be sufficient to relieve their distress, she said.”

“We made a break with Catholic morality, and have been trying to build an ethical and moral code that is not linked to religion … and we haven’t yet found a good way to do that. This isn’t what directly provokes a suicide, but it can create a context that makes life more difficult.” Bernard Landry

“Suicide rates in Québec are higher than those in other provinces; 1,136 Québecois killed themselves in 2006.  This is twice as many as were killed on the roads.  The Québec rate ranks about number 5 in the world, actually an improvement over the past 10 years – prior to that Québec had the highest rate in the world.  The decline has occurred mainly among young people; sadly the suicide rate among baby boomers and elderly people is rising.  The earlier moral and religious taboo against suicide collapsed during the Quiet Revolution, and this may have influenced the high rates among the baby boom generation in Québec.”

The high rate of youth suicide in some First Nations villages of Northern Quebec is an important public health problem. Based on a six-year field study in three villages belonging to the Atikamekw and Anishinabe groups, this paper proposes changes in three areas of social policy that could contribute to prevention of youth suicide.”

If suicide has these risks, then why do we believe that these vulnerable communities will not be the ones more likely to ask to be killed by doctors? Ms Hivon, has declared that Bill 52 provides an “emergency exit” an “exceptional option” in “circumstances of exceptional suffering”. Well just how are you going to define that for different people? What will the fall out of this ill begotten venture be in the Aboriginal Community already seeing the highest rates of youth suicides in Quebec. How about the babyboomers, the depressed the worried and the aged?

If the law now states that killing yourself is okay in one set of circumstances how will this impact the Suicide Prevention strategies in Quebec or indeed the rest of Canada? Maybe we should set up a hotline for all those would be suicides – straight to the medical killers – it makes no sense to try and prevent their suicide in Quebec now!  And if you are in Quebec don’t ask for the “emergency exit” your meaning might “get lost in translation” and you could end up dead.