Hello again everyone, this month’s message is based on two articles that have been published – one by Live Action in July 2022 and one by Vice in August 2019. 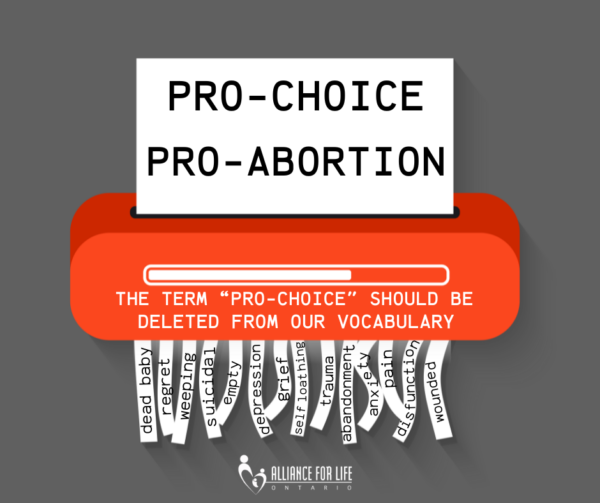 I absolutely mean it when I say that the term “pro-choice” should be scratched from our vocabulary when we are discussing induced abortion. You will remember that over a year ago our Abortion Pill Reversal Facebook page was taken down by Facebook after a massive attack, by members of the so-called “pro-choice movement,” to have it removed. Facebook did not listen to our arguments nor want to see the science behind our stance on abortion pill reversal – we were de-platformed and that was that! You will also remember our struggle with Google which again ended up with our abortion pill reversal advertisements being “dis-allowed” and subsequently removed – this effort was also driven by the self-professed “pro-choicers.”

Other “pro-choicers” even went as far as to try and have our website taken down, by making erroneous complaints to Health Canada which thankfully, were proven to be unsubstantiated. The reality is that those who rally under the banner of “choice” only respect the “abortion choice”. So far 3,500 women have regretted taking the first abortion pill and have sought help which has saved their child from death by chemical abortion. What about that choice? Surely, it is an incongruous position that states a support for choice which turns out to be only the abortion choice?

I raise all this today because in July 2022, Facebook took down the Heartbeat International Facebook page – again an assault driven by “pro-choicers”.

Let us be clear what we know about the Abortion Pill Reversal Procedure and the Network which consists of approximately 1000 physicians who have been trained to perform the Abortion Pill Reversal technique, an updated version of a method used to prevent miscarriages in the 1970’s, which has saved 3,500 babies lives. We know it is safe, successful 64%-68% of the time and it is based on good medical tradition and practice and performed by ethical physicians.

Then why are abortion advocates in such a frenzy about a woman making a different choice – precisely because they are pro-abortion not pro-choice! Attacking AFLO’s Abortion Pill Reversal Facebook, Google ads and website information and now Heartbeat International the abortion movement has literally denied choice to many women and prevented them from receiving important information which would save themselves from harm and of course provide them an opportunity to save their baby’s life. If a woman regrets her action to medically abort her child, why should she not have the relevant information once she has changed her mind, and be able to access the necessary help?

On the subject of informed choice, I found the 2019 Vice article quite intriguing. It is written by a woman who underwent a medical abortion and by her own admission regarding her phone call to arrange the abortion;

“I didn’t have much time to go into greater detail—and to be honest didn’t want to—so I went for the medical abortion, assuming it would be simpler….” Describing her feelings after the insertion of the second set of pills, “It felt like an act of self-violence. “I remember walking back out into the waiting room and folding into my mom’s arms—crying with a ferocity I hadn’t experienced since childhood….”

Having returned home about 4 hours later she states, “Within an hour, I had gone into full labor—I’ll spare you a long description, but: contractions, vomiting, bleeding, crying, sh…ing. It went on for hours.”

Twelve hours later having been diagnosed with dangerously low blood pressure she was sent to hospital. “After four hours of crying in agony, lying on the floor of the waiting room in the Pregnancy Unit among expectant mothers, a scan revealed what I was afraid of: that the abortion had not been successful and was classified as “incomplete,” a word I vaguely remembered hearing in my first consultation…. An “incomplete EMA” is when the process initiates, but the body fails to expel the leftover waste “product.”

May we pause here please, while a highlight a couple of things that screamed out at me. Firstly, as I have experienced with women once they have decided on induced abortion they stop hearing and don’t ask – they just want it over. Yet, it is the duty of the attending health professional to ensure that the patient knows everything, there is to know about the procedure. “I didn’t have much time to go into greater detail—and to be honest didn’t want to.”  Secondly, although at the end of the article a pro-abortion Physician Dr Neubauer states, “The only way we can help each other is to be honest and open… and to talk about it.”

I see no honesty in the choice movement. At no time in this article, which discusses three other women’s experiences, do we ever have a reference to the child in the womb other than, “leftover, waste product” “remaining products” “retained product” “end the pregnancy” “I could feel it inside me” “the pregnancy itself continues” “the pregnancy was terminated” “the potential child”

I believe the author’s last quote is probably the most poignant for me, “Still, this is the article I wanted to read both before the procedure and afterward, so that I could have been fully informed and prepared for what could happen to my body, rather than finding out during the process. I don’t want anyone to be as in the dark as I was.”

Sadly, she is still in the dark because she has not even considered what this procedure did to the body of her own little child. As most abortion advocates tend to do, she has seen the medical abortion only with regard to being pregnant and not being pregnant. This is the greatest betrayal of the pro-abortion lobby, when its idea of informed consent has a gaping information gap regarding the other patient – in the womb. How can the abortion lobby ever consider itself “open and honest” if in order to promote abortion it has to disguise the presence of the mother’s child by reducing her child to a “leftover waste product”?

The subterfuge, the verbal gymnastics, the pseudo-science and unethical practice of a physician killing one patient at the request of another patient paid for by government, which have come together to fool women into believing induced abortion is actually a benefit, needs to be challenged at all levels and at all costs. Medical bodies need to consider every one of their patients all the time and stop supporting induced abortion, which by the way is not medically indicated for any injury, illness or disease. If we could ever have an honest and open discussion, we might be able to assist women experiencing unexpected pregnancy, not abandon them to the abortion industry – but that would probably require too much honesty by the medical, legal and political establishments leading to years of apologies.

Well, don’t just take my word for it Pro-choice is Pro-abortion here is what the folks at Shore state!!

I am not sure how I missed this little gem, but the Shore Centre in Kitchener hosted what it called,  “Pro-Abortion Rall,y on June 29th and one at least of its supporters questioned the use of the term “pro-abortion.” Here in part was the response from Shore. 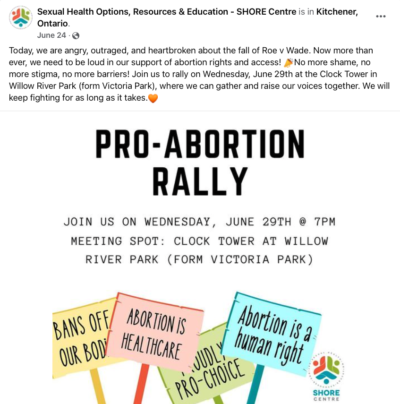 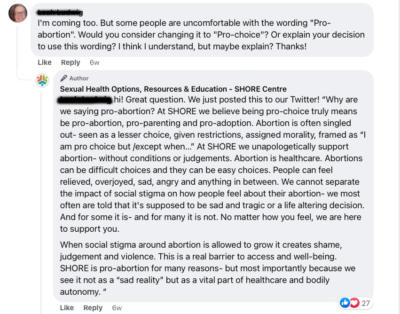 “ At SHORE we believe being pro-choice truly means be pro-abortion (my emphasis) pro-parenting and pro-adoption….”  Okay, Shore is fine with a woman having her child killed, raised, or adopted!! So, no difference in any of these choices for SHORE not even the one where the child is killed?

“At SHORE we unapologetically support abortion – without conditions or judgements..”  Okay then, SHORE supports abortion for any and no reason during all 9 months of pregnancy?

“Abortion is health care”  Forgive me if I am having trouble with this statement. How on earth can abortion be considered health care when the sole intent of the procedure is to kill the child in the womb?  Also, this incessant clamour that abortion is medically necessary. Dr Donna Harrison explains why abortion is not necessary to save a mother’s life, but good medical practice which regards both lives certainly is needed. See the following link: https://aaplog.org/fact-checking-the-fact-checkers-abortionists-misrepresent-the-facts/

“SHORE is pro-abortion for many reasons – but most importantly because we see it not as a “sad reality” but as avital part of health care and bodily autonomy.”

Suffice it to say, that that I find it hard to see how a procedure such as abortion can be described as “healthcare” when it kills one patient and totally ignores that patient’s “bodily autonomy” I found an interesing piece regarding a physician’s duty of care in Ontario and it has left me with a question. If a doctors accept a pregnant woman as a patient for any reason, including abortion is there a legal duty of care to the child which is being totally ignored when the procedure is abortion. Thoughts for another day

“The duty of care in healthcare is pretty simple. If a doctor accepts you as a patient, they have a “duty” to provide you with quality care.” https://himpro.ca/duty-of-care-in-healthcare-in-ontario/